My mum's debulking surgery called Ultra Radical Debulking Surgery was only confirmed 12 hours before we had to wake up to go to hospital for her surgery.

Accessories
In preparation for surgery, we brought a few things for my mum's recovery in hospital.  It also helped to mentally prepare ourselves for this next step by thinking through things we would need.  We bought a dressing gown, some comfortable slippers for her to walk around in and some loose fitting trousers for discharge that would not hurt her wound.  For myself as the carer (the person everyone always forgets) knowing that I would be very busy the weeks post surgery, I made some meals to put in the freezer.  Even though I would be rushing from hospital to work to bed, it's still important to eat.

Diet
During my mum's pre-operative assessment, the medical staff had informed my mother of how she was to prepare for surgery.  Most importantly, how to prepare her bowels. This meant a strict clear liquid diet the day, some pre-operative drinks that would provide her with vital energy and aid her recovery post surgery and medication she normally takes that she was not to take before.

Logistics
During the pre-operative assessment, the medical staff advised us of when to arrive and where and what to take.  There were very strict instructions and we followed them to the latter.  It was a big surgery of between 6-10 hours and the only surgery for the surgical team that day.  As such, my mum was to arrive at 7am for a 9am surgical start but as she had to stop drinking all fluids and this included her medically prescribed pre-operative drinks, 2 hours before she was due to arrive, it meant waking up at 4.30am.

Surgery
I was pleasantly surprised by how calm my mum and I felt entering the hospital and waiting.  We had a short conversation with the surgeon where my mum consented for her surgery.  He also said that he prepared a heart surgeon to be on standby should he find cancerous tumours on her heart during the laparoscopy.  She tells me afterwards that she was quite scared at this point and for a second, thought of chicken'ing out.  It was a mixture of emotions, relief that she would finally get the surgery that we had been hoping and praying for versus fear and trepidation of how big the surgery was and what would happen afterwards.  My mum got changed into the hospital gown and the anesthetist came and introduced himself.  He asked a few questions, looked at her notes and then exclaimed excitedly "Guess what?" and I looked at him a little worried, wondering what he had read and said "What?".  He said "I was the anesthetist when she had her laparoscopy in May!"  For a hospital which is dedicated to oncology, to happen upon the same anesthetist twice, what a coincidence!  We took this as a good sign.  He was a very kind man and allowed me to accompany my mum until she was anaethetised since she would be having an epidural and he needed me to help translate his instructions and keep her calm since this was a big operation.  I've never been inside a hospital theatre but I can tell you as my mum climbed up to get on the table, that it looked very hard and not in the least bit comfortable.  Standing outside, as the surgical team entered in and out, I could see inside.  The lights were extremely bright and as the door opened and closed, I could feel the cold air conditioning billowing out.  It was very cold in there.  At this point, as I looked at my mother preparing to have her epidural, I started to get teary but watching the anaesthetist work, I had complete trust in their abilities and knew that she was in safe hands.  The anaesthetist had me talk my mum through the short procedure as he inserted the wire for her epidual to be administered.  Her blood pressure and heart rate was being monitored and I could very clearly see, if not through the monitors but in her eyes, that she was nervous.  The anaesthetist told me to tell her that she was going to feel woozy soon and when I told her, she said "I love you" and that was very difficult,  then she said "I'm going to sleep now" and like that she was asleep and I was ushered out to the waiting room.

Waiting
It was long.  A really, really, long surgery.  Hour after hour after hour ticked by.  Slowly. Painfully.  The surgeon had asked her if it was ok for students to view the surgery since our local hospital is actually an Oncology teaching hospital and he said that his surgeries were always popular.  In a way, this filled us with confidence since you can't really slip up if you have an audience, right?  It also showcased his expertise in the field and made us have even more confidence in his abilities.  As I waited outside, I watched the different surgeons and staff entering the unit and wondered if they were going to observe my Mother's surgery.  When the surgery went past 3 hours, I was optimistic that the surgeon was able to remove all traces of cancer.  When the surgery hit the minimum 6 hour threshold and carried on, I started to use that as a pointer of how advanced the cancer was.  After surgery, my mother was to spend 48 hours in the Intensive Care Unit and that was where I first saw her when she came out of the theatre.  I would strongly advise you to prepare yourself emotionally for seeing your loved one, with tubes and 'attachments' coming from unexpected places.  Your job is to be strong and supportive as they come round and ask questions.  In actual fact, my mother moved from ICU to a ward less than 24 hours later as she had no complications in surgery or post-operatively.  This reflects her recovery overall but I shall detail that alongwith tips for recovering from surgery within the next blog post.

The surgeon came to see my mother and I in ICU soon after she woke up.  He looked extremely tired and his efforts showed visibly in his demeanour.  There was a lot of cancer he said, it had spread to her heart but the surgery was very successful.  Every day, I read such terrible news reports of terroism, political agendas and accidents yet every day, in hospitals, surgeons, anesthetists, nurses and doctors save lives and eradicate pain from individuals and families yet receive little to no recognition. Angels do walk this earth among us and this is for all of them.

Just a short addendum as I've been nominated and shortlisted for Carer blogger of the year within the Health Unlocked 2017 Health Blogger Awards. 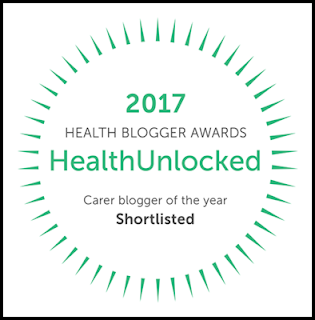 Voting opens on Monday and I'd appreciate it if you could vote for my blog here.