Blenheim Palace: a day out

It's a dreary Autumnal day where I am cosied up by the fire but I wanted to document a fantastic day out that my mum and I had a few months ago to make sure that I capture the memory.  The week my mum was discharged from hospital was filled with lots and lots of rest and relaxation. With an 18 inch wound down her chest and staples, she was tired.  She did gentle breathing exercises as prescribed by the surgeon since her diaphragm had been scraped, she ate healthily and the most disturbing thing were the daily Dolteparin Fragmin injections I had to give her in her thigh.  Yuck!

Luckily, I was able to practice before she was discharged under guidance of the nurses but it was still scary to do it at home by myself, unsupervised.  I won't lie, I dreaded having to do it every morning but it had to be done.  I will say, to people who have never administered an injection, it's like a peach and cutting raw pork chops has never been the same since eeewww!!!

I had received two free tickets to Countryfile Live at Blenheim Palace two weeks after her discharge. As is our life now, I had no concrete plans to either attend or not as it's hard to gauge how she'll be feeling on any given day.  But we woke up, it was sunny, she was feeling well and we decided to take the wheelchair and go.

Mobilisation
It was clear that my mum wouldn't be able to walk the distance given she's walked 0.2 miles at the most.  The grounds of Blenheim are vast, there would be crowds and lots of distance to cover so we decided to take the wheelchair.  The wheelchair, designed to be lifted by either a very strong individual or two people.  Not 7 stone 5lb petite females,  But in the same way that I found the courage to inject her, I found the strength to lift the wheelchair into and out of the car.  You see, I really, really wanted her to enjoy her day out.  Since diagnosis, she had been plague'ed with ascites, a build up of fluid in the abdomen which had restricted her mobility.  Surgery changed everything. Such an enormous milestone and major event, our lives will never be the same again.  Since surgery, there's almost a sense of relief, that we see a different world, what was not there before, hope, of a new and recovered life.  Life, not as we knew it, but some semblance of life is in our grasps.  This outing was her first outing, not including doctor's, appointments, bloods or food shopping.  This outing was for enjoyment.  Something we take for granted every day.  Without the wheelchair, this would not have been possible.  It was difficult, especially pushing it on grass and there were some areas that remained inaccessible butw e were outside, in the sun, among others.

Food
Since diagnosis, my mum has been on a dairy free, salt free, sugar free, organic diet.  I like to cook lots of vegetables and organic meat only.  But this was a celebration, so I decided to relax the rules and buy food.  After all, there was already a lot of preparation, why not give myself one less thing to worry about.  Thankfully, there were many food stalls and I was able to choose sweet potato wedges and vegan paella which my mum really, really enjoyed. 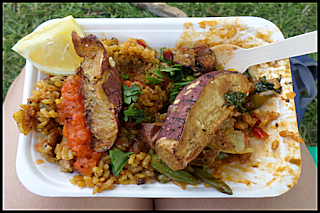 She even asked that I make sweet potato wedges at home which I have done since and done well!

Preparation
Other than buying food to save me cooking, I had decided beforehand the route we would take around the show.  This would save time and energy of my pushing the wheelchair.  The parking was expensive but again, I was willing to pay to give me the convenience of being able to park closer, especially since my mum has blue badge parking.

Make memories
We had an absolutely fantastic day.  We didn't stay long, 4 hours as she was still 2 weeks post surgery but it was amazing.  She enjoyed watching a band whilst I walked around the site by myself and was incredibly happy to listen to some live music in her wheelchair in the shade.  She interacted with strangers and crowds which she had been giving her some anxiety for some time.  Most importantly, it gave her confidence to live her life again, not feel like a patient for a day.  After all, what's a 9 hour surgery if you're not going to grasp life again afterwards.

I hope you all live life to the fullest each and everyday.