Surprisingly, after being discharged from hospital less than a week ago, my mum was feeling better than was to be expected.  So much so, that I was able to go to work and she felt confident enough to be at home by herself.  I prepared some food for her lunch so that she wouldn't have to cook anything.  But as it was such a last minute decision, I decided to cook some quinoa in the morning which as I was so late to get to work, I burnt.  Oh no!!!  Not a great start to the day.  I've got very good at multi tasking lately, especially in terms of cooking but today was not to be one of those days.  In any case, I quickly peeled some sweet potatoes and boiled them so she could have that for her lunch.  Our diet is generally laden with vegetables, especially leafy veg, lots of fruit and fish and occasionally some meat such as pork or chicken.  But since her discharge, we've concentrated on foods that are high in fibre and have a natural laxative like effect.  I have to say that the word laxative used to scare me a little and send a shiver down my spine but now, laxatives are my friend!!!  Laxatives have a very bad reputation in the media, comedies especially where they are used to trick people.  Natural laxatives for us, tend to be sweet potatoes; mangoes; grapes and leafy vegetables.  These foods keep my mum regular and most importantly, are foods that we really enjoy and so I try to integrate these foods into our diet if not daily then every other day.  Don't get me wrong, she has been regularly taking laxatives aswell as we do not want her to be constipated again but diet and what foods and liquids we put into our body massively affect our health overall.  This is something that I've learnt over the last 6 months and has had a major effect on our lifestyle.  After diagnosis, my mum and I changed to a purely organic diet and I do not add processed and refined salt.  Some foods contain natural salt and there are some ingredients or foods my mum eats which contain a small amount of salt where the benefits of her eating these foods far outweigh the negatives such as Weetabix Protein.  Protein is an important building block for our bodies which is responsible for building muscles, cells and tissue which at times, my mum will lack and again, contains fibre so though it contains salt, it's a good way of squeezing some protein into her breakfast.  However, I must add that I'm neither a nutritionist or studied food nutrition but do believe that diet can affect my mum's health and her treatment.  I experiment regularly and research food groups, changing the way I cook based on the results from my mum's blood tests.  For example if she has an iron deficiency, I cook plenty of spinach.  Being extremely busy though, does not mean that I compromise on our diet.  If I have little time, then I will steam some salmon or boil some green beans.  Salmon has a great natural flavour which does not need heaps of additional flavourings, gorgeous on its own or with a little pepper, chopped up ginger and coriander, it's a simple and quick dinner which is exactly what I made in the evening when I got home for us for dinner. 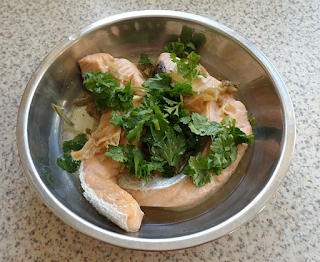