A catch up - chemotherapy cycle #5 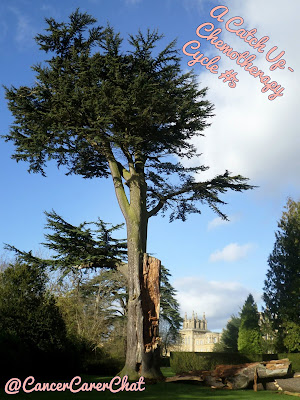 Since blogging in depth on my mum's chemotherapy cycle #4 in my daily chemo diary blog post series, I wanted to catch you up on cycle #5.  Well, this cycle was a lot less dramatic in terms of hospital admissions but was still not without its drama, and emotions were still fraught.  The IV drugs my mum has administered during her treatment are aggressive on her body and after 4 continued cycles and a 9 hour major operation, has had a cumulative effect which is draining and tiring.  I recently read a humorous story posted on line which describes chemotherapy and cancer perfectly.  I haven't been able to find the source to link directly to it so I'm re-posting it here.  I'd be interested to know who the original creator is.

This describes our journey perfectly and I can tell you that we are currently at the steep incline approaching the top of the mountain.  The 4-5 days after chemo are difficult for my mum in terms of energy levels and fatigue.  She was exhausted to say the least.  I won't lie, when I'm at work or watching tv and I hear someone complain about how tired they are from staying up all night or have a sniffly cold, I feel my blood boil.  Fatigue is for my mum, having to sit on the sofa and look into space with no distraction .  Lack of energy is having to pull yourself up the last stairs because you don't have the energy to walk up a staircase.  Tiredness is not talking because it takes too much energy to form a sentence in your brain.  But there was no admittance into hospital and for that we are sincerely grateful for.  This feeling lasted approximately 5 days.  My mum is typically like other mother's, she does not like to lie in bed all day and does what she can, when she can so there is always some movement from her, alebit slow.  There is still some neuropathy in her fingers and toes even though the dosage was reduced for chemo #5 and when we saw her oncologist, for a follow up, the doctor confirmed her dosage would continue to be reduced.  Chemo #5 has also been a time when we have started to talk about "life after chemo".  There have been two amazing days out that I want to dedicate to separate blog posts as I want to cherish the memories.  A few months ago, a few weeks ago, days out were a distant dream but 2 days out during cycle #5 have shown vast improvements in my mum's confidence.  Health care providers are great at follow up care in terms of physio, follow up appointments but have completely missed the damage that hospital admissions, treatment, an incurable illness can have on confidence.