Blogmas on the CancerCarerChats blog is a daily charitable Christmas gift guide with a twist - each post will feature an idea for a charitable act.  Christmas is a time for giving whether it be for someone you know or for a stranger.  Take the time at this time of the year to do a good deed, just one small act can help someone who is less fortunate than you are. 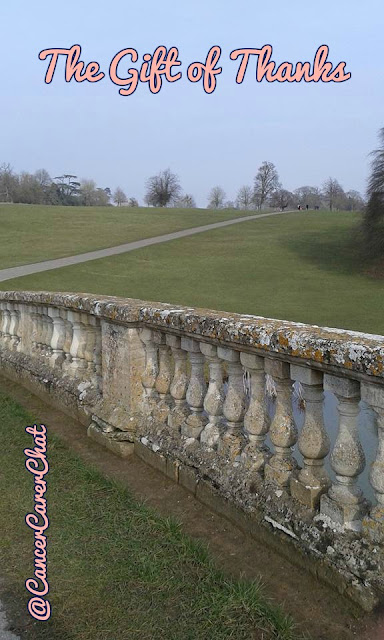 The other day, I was scrolling through my Twitter feed @CancerCarerChat and noticed a tweet by a high profile Youtuber with 9 million followers simply thanking Virgin Atlantic for a great service having obviously flown with the airline.  This tweet was shortly followed by a second tweet responding to comments he’d obviously received suggesting that he was praising the airline for perks where the intention would be to get either a free flight or a discounted flight.  He responded with the comment that Twitter should not only be used to complain, bash people or spread hate but to compliment people or thank them for a service you normally would not be able to, without financial gain.  To me, this was really interesting.  We’re so used to criticising and commenting on social media that I wanted to write a blogpost, during my Charitable Christmas Gift Guide highlighting some of the smaller charities and inspirational people that together, are passionate about making the lives of people affected by cancer easier in some way.  Whilst working on the blog CancerCarerChats I've come across several people who as either patients or in some way affected by cancer, have selflessly dedicated themselves to making the lives of those affected by cancer better in some way.

Chris Lewis.  One of the founders of Your Simpal and a regular blogger supporting people who have been affected by cancer through his community forum, Chris was diagnosed with Lymphoma in 2007.  He is an inspirational speaker and blog writer raising awareness of the difficulties people diagnosed with cancer face in an effort to ensure they have the support they need, when they need it. I am inspired by Chris for his insightful comments and positive activism in an effort to ensure the patient voice is head and needs are met.

Fi Munro –  a multi award winning researcher, writer and cancer survivor, Fi is a truly inspirational individual, diagnosed with stage IV ovarian cancer in January 2016 she spreads kindness and happiness through her greatest achievement, called ‘Random Acts of Kindness’ where donations are gifted as and where she thinks its required.  Fi practices a healthy lifestyle and mindset through diet, yoga and kindness and blogs about the lessons her ovarian cancer diagnosis has brought her to ensure she lives a fulfilled life.

Something to Look Forward to – a charity that  aims to bring short respite by gifting presents that have been contributed or donated to people who have been affected by cancer. either themselves or their loved ones.  A cancer diagnosis is draining, physically, emotionally and financially.  Something to Look Forward to have listened to their needs and by offering them a small gift, offered them a distraction in an attempt to eliminate some of the burden that they may face.  This is an organisation that unintentionally assists with recovery by mending the emotions of those affected by cancer.

Jane Baylis – Jane is a young carer, looking after the needs of 3 family members.  A regular contributor to social media, Jane seeks to raise awareness of the dedication and strength required to be a carer through her busy lifestyle.  As a carer myself, I look forward to her tweets where by sharing the emotional and physical struggles of being a carer, she highlights the strength required to be a carer.  In short, she makes me feel like I am not alone.

Working With Cancer - An invaluable service supporting people who have been affected by cancer integrate themselves back into work.  On a personal level, I am grateful to this organisation purely for recognising the struggles associated with working whilst being affected by cancer.  As someone who's work has been affected by a cancer diagnosis I can tell you that having to speak to HR is terrifying.  Organisations such as this recognise the need for a work/ life balance, the difficulties a cancer diagnosis can have on not just those affected by cancer, but the loved ones around them and provide support.

NHS doctors’ and nurses – during my mum’s treatment, the paramedics’ have been called to my house twice, she’s been taken to A&E in an ambulance once, she’s been hospitalised four times and had in excess of 200 needles poking and prodding her.  We have encountered more than our fair share of doctors’, nurses and healthcare professionals’ all of which have been attentive and sympathetic.  I have seen pockets of immeasurable kindness in the NHS which goes above and beyond their duty.  So to all the Nurse Sarah’s, Eduardo’s and (tattoo) Tom's, the Doctor’s, the pharmacists, the phlebotomists and oncologists thank you, thank you and thank you again.

When my mum was diagnosed with advanced ovarian cancer, I became her carer and our lives changed so much that deep down, as much as I thought I knew who I was and how fulfilled I was in my life, we couldn’t go back.  So in my quest to find a place of solace, I started writing my blog and in doing so researching treatments, healthcare, diet and finding other people who had gone through the same journey.  The people and the organisations above have all helped to fill a void in knowledge, support and sometimes, just the general belief that there are kind people in the world.  Sometimes though, as I write another blogpost, I do wonder if it’s worth it as I’m sure others in the community do.  As we give a little bit more of our heart, is it making an impact.  Let’s face it, we all have other, bigger, more important problems to deal with.  So I just want to say to the above.  Yes, it is worth it.  Though it may not seem like it sometimes (I know I feel like that when I look at my Google Analytics account!) but little by little, step by step, word by word, we will make a change and make the lives of those affected by cancer better.