What's in a prognosis? 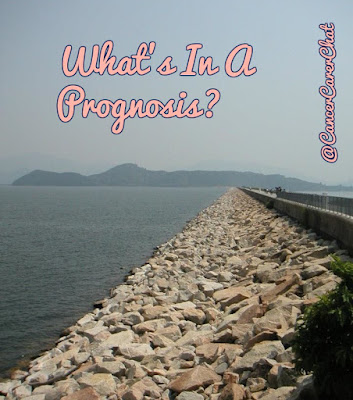 A few months ago, I ran into a friend that I used to work with and hadn’t seen in a while in my local supermarket.  We were catching up between the aisles and I mentioned that I work part time now and she thought this was out of character since she knows how career driven I was and am and had never mentioned that this was something that I was considering.  I told her about my mum’s cancer diagnosis and one of her first questions was “What’s the prognosis?”  I remembered feeling uncomfortable.  A few weeks later, I was chatting to a colleague and he mentioned that he worked part time as a psychotherapist, being from Singapore and being able to speak Cantonese, I thought it might be good for my mother to speak to him and informed him of her current situation.  As I told him of her diagnosis, he asked "What's her prognosis?" and I had that familiar feeling of unease.  For a second I was quite taken aback with the question.  I remember thinking it was a very direct question and also a very personal question.  But most importantly, I knew I didn’t like the question and how it made me feel to have to answer it.

I started to think about why this question made me feel so uncomfortable.  Why was I so agitated when I was asked this question and why did I find it so difficult to communicate the diagnosis that the Oncologist’s had given to my mother out to a friend or a colleague.  Was it shame?  Was it too difficult to discuss?  Was I in denial of what that diagnosis was?  All I know, is that I found it very difficult to answer that question.  There is an answer that I could have given her and that answer is one that was given to us by the Oncologist’s when we discussed her diagnosis.  Before my mum started treatment, she had a laparoscopy where a small camera was inserted into the abdomen and a sample taken to ascertain the type and stage of her cancer.  This staging then guides the Oncologist as to what her prognosis is.  I remember when my mum was first diagnosed we asked several doctors’ and nurses, how long does she have left.  I remember researching again and again on the web ‘Survival rates for Stage IV Ovarian Cancer’ desperately searching medical journals and online forums, the prognoses women had received, disregarding those with a different types, gradings, looking for someone with the exact same type of cancer, who had travelled the exact same journey as my mum to identify how long she had left.  I can imagine that’s what a lot of people who have been diagnosed do.  With the rise of social media, I see a lot of forums online where people have the opportunity to share information, they never had the opportunity to do so before social media.  Looking back, I was immersing myself in as much information as possible to find that single answer, a digit, a date, a definitive answer that would tell us how long she would have.

I remember vividly, after 3 rounds of chemotherapy, recovering in hospital, my mum finally met the first medial professional who spoke Cantonese in her native language.  A registrar from Hong Kong, Dr. XXX was doing a year's exchange and working on the ward that where she was recovering from surgery.  The other staff on the ward, knowing my mother did not speak English, asked that he speak to her to see if she had any questions.  My mum really enjoyed speaking to him, asking him questions and of them, she asked "How long do I have left?"  He answered as the other doctor’s had asked, that it was dependent on how she responded to her treatment and how well she recovered.  I think the opportunity to hear this first hand from a doctor, rather than it being translated to her was pivotal for her as not long afterwards she said to me “Really, the doctor’s can’t tell me how long I have left, can they?  No one can.  No one knows”.  Since then, she’s not asked the doctors anymore, how long she has left.  I think that’s why I struggle with the question “What’s the prognosis?” when I am asked by friends or by colleagues.  I struggle because I don’t know the answer to that question.  No one knows the answer to that question.  We are not statistics and neither are people diagnosed with cancer.  The average age of a woman’s death in the UK is 81.6 years compared to 83.84 years in Japan.  I am a woman from the UK but this does not necessarily mean that I will die when I am 81.6 years old!  Common sense tells us that my diet, general health and lifestyle needs to be taken account.  Why then, do we immediately feel that a person diagnosed with cancer conforms to the generalisation of the prognosis documented in medical journals?  I obsessed over that question when my mum was first diagnosed because that’s what living with cancer does.  It makes you address mortality and the fact that we will all most definitely die at some point and the question is perhaps not when will we die or what’s the prognosis but what will we do with that time?

But the question “What’s the prognosis?” not only confuses me since it’s a question that no one can answer but I also found it offensive to be asked that question, and I’m not the one that has been diagnosed.  I remember feeling uncomfortable being asked, like I was asked to disclose private information “How much do you have in your bank account?” or “When was your last period?”  For me, “what’s the prognosis?” crosses boundaries.  Firstly, some people choose not to know the prognosis.  It can not only be misleading but is never and can never, ever be accurate, so why live life with false information that has been dictated by a mean average.  I don’t for example, live life thinking I will die at 81.6 years so why would someone with a cancer diagnosis live life in accordance to their prognosis.  In actual fact, do we therefore not all have a prognosis????  It should not be assumed that everyone wants to know what their prognosis is as research has shown that it can affect mortality.  Secondly, it’s rude.  I would never dream of asking a friend or a colleague in a conversation, when they expected to die, so why would it be acceptable for someone to ask a cancer patient the same question?  Does the answer affect how you will treat the person with the diagnosis?  Will you treat someone with more care should they have a shorter prognosis or will you breathe a sigh of relief and think, there's nothing to worry about, move on, should the prognosis be longer?  Does a prognosis affect the relationship that you will have with that person?