Friends. The one with the cancer diagnosis 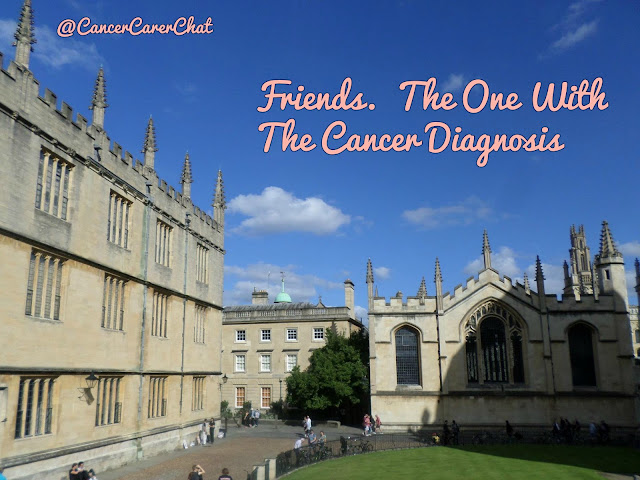 I’m going to put it out there.

People are weird.  They can do odd things and say strange things, people are always surprising me with the things that they say and do and I think it’s because people are guided by their emotions and feelings.  In this way, it can make friendships and relationships extremely difficult.  Not everyone is capable of healthy relationships and not everyone gets on with each other.  We gravitate towards those people who have similar personalities to us or similar interests or for other reasons.  Relationships and friendships are hard enough as they are but can really be tested with a cancer diagnosis.  Cancer can put someone under immense pressure and stress and undoubtedly affect those people around them, testing the strength of those friendships.  I’ve heard of friendships being put under immense strain and relationships splitting as a result of cancer impacting someone’s life.  Personally, we’ve lost friends as a result of my mum’s diagnosis but we’ve also made friends too.
When my mum was first diagnosed it was a shock for all of us and there was a lot to try and absorb and understand both in terms of information and emotionally.  As such, my mum didn’t want to tell friends, she felt it would be frustrating having to deal with the questions and it add a further level of stress for which she didn’t need at the time.  She did though, tell one friend that she trusted and wanted to, she though, eventually told another, who told another and soon enough, it was the unspoken story or as she felt at the time, gossip.  She because angry and frustrated and didn’t believe that her friends really cared about her but just wanted to know what it was like, the mystery behind cancer.  The vomiting, the hair loss, the fatigue.  There's a difference between caring and inquisitiveness.  She was, undoubtedly, confused and wanted to be left alone.  One day, she asked that I field her telephone calls, she did not have the energy to deal with telephone calls asking how she was.  She was tired and stressed and adjusting to her new lifestyle and survival took over.  All her energy was to be channeled into fighting THIS cancer and not wasted on unnecessary socialising and I agreed.  We all make decisions about what’s best for us at that time and with her current situation, she became selfish.  And why not.  She was entitled to be selfish when I saw how after a chemotherapy infusion, she was so tired, it took all her energy to ask that I bring her a glass of water.  She was tired from walking up the stairs to her bedroom.  The Oncologists’ praised her for continuing to get out of bed everyday throughout her chemotherapy.  Survival meant no more phone calls with friends that took all her energy.

“Real friends allow you to be selfish when its needed.”

During the time that I fielded my mum’s phone calls, to be honest, I also got tired with it after a while and wished that I could just hang up as opposed to answering the same questions again and again “How many chemotherapy sessions does she have left?”; “Does she have an appetite?” and “Has she lost her hair?” Is this really in our best interests?  I thought.  Are these really friends who care?

The “Rub a wild herb from the Himalayan mountains on it – that’ll cure it” friend
One day, soon after my mum was diagnosed with Stage IV Ovarian cancer, a friend from Hong Kong called and I said that my mum was sleeping when in actual fact, she was sat next to me, frantically waving her hands at me, desperately signalling that she didn’t want to take the call.  "I'm not in" she mouthed.  She asked how my mum was and then asked what I had been doing.  I did tell the truth and said that I was just preparing dinner.  What was I cooking? she asked inquisitively.  I told her that I had spent the last 1.5 hrs roasting a chicken and was going to take the bones and make a lovely soup for my mum.  “Oh” she replied ominously “Well….just once will be ok but she shouldn’t really be eating chicken with cancer."  I was fuming, I had just told her how long I had spent cooking the chicken but before I had the chance to ask her why she said that she had heard great things about a wild herb.  She started to give me instructions on how to boil the wild herb up and asked me if I understood since I wasn’t responding with appreciative responses.  I told her that I wouldn’t be doing that since there was no scientific proof and I wouldn’t be giving my mum something to eat that was questionable.  I’m fine with organic fruits and vegetables.  I draw the line at wild herbs to cure cancer.   I told my mum what she had said and how angry I was given that I had spent so much time  roasting a chicken and what made it worse was that my mum started questioning whether chicken was a ‘safe’ food to eat given she really trusted that friend.  At this time, I had taken on all the  responsibilities of cooking, at a time when her diet was changing drastically day by day and she was losing a lot of weight, this was another frustration to add to my already tired and frustrated state.  “How can chicken be bad for you?????”.  My mother started to get very worried and I think that’s what made me even more angry, is that she started be believe the myths and rumours with no scientific proof.  And who can blame her.  One day she was fine.  The next day she had cancer.  Everything in life had to be questioned.  Nothing made sense anymore.  I turned to my logical side and decided to contact a friend in Hong Kong who happens to also be an Anaesthetist and with a medical background, ask him if chicken was 'safe' to eat.  I am forever grateful to this trustworthy and reliable friend who sent me a link to an oncology website with FAQ’s targeted to the Hong Kong audience with the question “Is chicken safe to eat?”  The article described newspaper reports where chickens in Hong Kong had been injected with hormones and then sold at the market.  For this reason, they advised people in Hong Kong to avoid market bought chickens and stick to organic chickens.  I showed my mum and she felt comfortable again, eating organic chicken, that I bought from Sainsbury’s.

Whether there is an illness or not, it’s important to be supportive of your friends’ needs and wants.  Support them in their decisions and give them the space that they need, allowing them to come to you when needed.  It’s important to listen if someone close to you has been diagnosed with cancer, the most important thing you can do is allow yourself to be talked at, give no advice and love and support them whatever the outcome

"Real friends respect and support you"

The “I’ve been through the exactly same thing – but worse” friend
My mum has a friend that has been living with Leukaemia for five years now.  He has been through treatment and surgery.  When my mum was diagnosed, he liked to give her lots of advice and tell me his story of what he’s been through and the medication he now has to take for a lifetime.  It was funny to listen to them talk as not only did he like to share his stories with us but for all her experiences, he had been through the same, always for longer and always to a grander scale.

The “You have a duty to keep us informed” friend
When news of my mum’s diagnoses traveled through her friends’, the phone rang non-stop.  It was constant.  At a time when we were waiting for news about her treatment and appointments from Oncologists' and already anxious and stressed.  And when they couldn’t find my mum, they contacted my sisters and I.  Facebook, Whatsapp and even one surprise visit to the doorstep later (we were ambushed!) the attempts to track her down soon whittled down to the those who would not give up.  During one (weak) occasion, I spoke to one of my mother’s friends and he asked if she had informed a close friend and I confirmed that she hadn’t.  He said that I had to, that it was my duty to do so and keep her friends informed.

If someone close to you has been diagnosed with cancer, tell them that you're there if they need you or need anything.  Understand that they are being selfish but it's for survival and when they are ready, they will come back to you.

"Real friendships live in the heart"


Cancer is not just a change to your health.  When diagnosed, a person begins to live with cancer, indefinitely, it always there, in the background and not only does it affect your life, but those around you.  Cancer is a lifestyle change and everyone reacts differently to it and at different speeds.  Friends may be lost and part ways but that’s the nature of life and that’s sad but we also learn new things.  I am grateful that I had this opportunity to tell my mum how much I really care about her.  I am glad that my mum has had this opportunity to see how much her daughters’ love her.  She knows this now, without a doubt, through the power of her actions.  Yes, some relationships end because of cancer  but some relationships become stronger and more important.  We have lost friends' but we have also gained new friends'.